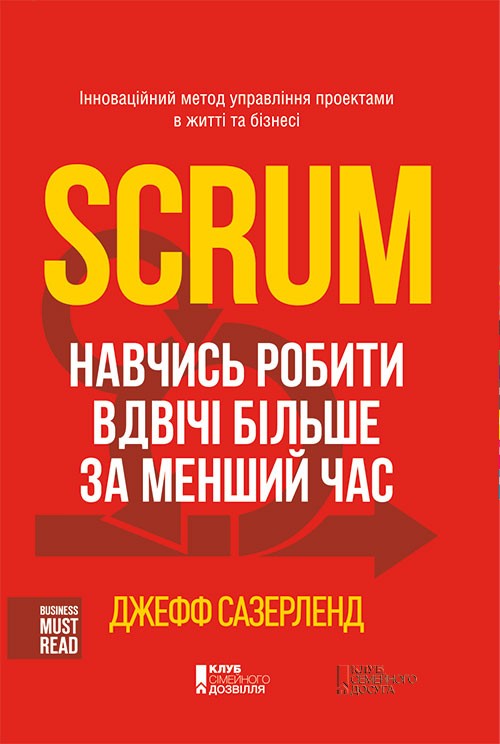 The Scrum methodology is a solution found by Jeff Sutherland to overcome the classic shortcomings of project management: the lack of coordinated work within the team, the failure to fulfill the planned plans, duplication of tasks within departments, etc. Unlike the old "phased" approach, in which huge funds and which often doesn’t lead to anything, Scrum allows you to fulfill obligations with less effort, in a short time and at low cost, and the final product is of excellent quality. Today, Scrum is already firmly entrenched in the management arsenal of most technology companies in the world. This productivity tool is now available to you.

Soft for 30 days. How Scrum makes the impossible possible

After reading this book, you will get acquainted with the Scrum methodology and learn how this non-standard approach works and how to start applying it in your business using the example of the software development process. Agile and Scrum’s flexible technologies enable you to accomplish what previously seemed completely impossible — to create a complete, working software product in just 30 days. This book will help executives and managers of companies who want to end the expensive and slow software development cycle.

User stories are a method of describing requirements for a product being developed. The author readily and interestingly tells how to properly use this technique in order to focus on the task and the wishes of the client, rather than spraying on the implementation of secondary functions. The described approach not only accelerates and systematizes development, but also improves mutual understanding in the team. In this book you will find:

This book, which was eagerly awaited by the community of supporters of flexible software development methodologies, describes the process of preparing requirements for the developed system, which saves time, eliminates the need for alterations and leads to the creation of more advanced programs.

Coaching agile-teams. A guide for scrum masters, agile coaches and project managers during the transition period

If your teams implement agile practices, do everything right, but do not get the maximum possible results, if you already have experience as a scrum master or project manager and would like to become an agile coach, but are not sure that this role suits you - then this book is for you. She tells in detail how to properly teach the team the values and principles of Agile, who the agile coach is, why he plays one of the most important roles in obtaining the desired result, and what is needed to become a professional agile coach.

Product management in Scrum. Agile-methods for your business

The core of every successful agile development team is a visionary, motivated and highly empowered product owner, capable of being not just a manager, but a member of a scrum team, ready for close and constant cooperation. Roman Pichler, one of the leading experts in Scrum and agile product management, in his book considers all the components of this role that are necessary to lead the company to excellent results. His book is about what the role of the product owner is, what typical difficulties and pitfalls he faces in his work, how to overcome them, and how the agrum-based product management based on Scrum differs from traditional approaches and how to apply scrum effectively -techniques in practice. Published in Russian for the first time.

Impact mapping: How to improve the efficiency of software products and projects for their development

Impact Mapping - a practical guide to influence maps, a simple but very effective method of software development. It helps even at the stage of strategic planning to organize the cooperation of various specialists and, as a result, create effective software products.

Agile retrospective. How to turn a good team into a great

Esther Derby and Diana Larsen are two successful facilitators with over 20 years of experience in software development. Their book is mainly devoted to short retrospective sessions, which are held following an iteration lasting from one to four weeks.

The authors describe in detail the structure of the retrospective session, the process of its planning, development and implementation, as well as share detailed scenarios, step-by-step instructions and stories from real retrospectives.

This book will be useful not only for leaders of Agile teams, but also for all leaders who want their team members to think, draw conclusions and work together. Also, the publication will be a useful tool for trainers and consultants working with project teams.

“Kanban” in Japanese means “signal board”. In production, such a board is used to visualize the growing pace, which allows you to produce more products at lower cost. A vivid example is Toyota’s approach, thanks to which the principle of “on time” with minimal costs has been effectively implemented for many years. David Anderson gives an expanded set of ideas (visualization of the process and work rules, typing of work items, service classes, cadences, metrics and graphs for managerial accounting and analysis) that determine the kanban method. The book describes tools that can effectively introduce lean manufacturing ideas into technological developments and IT operations with minimal resistance detecting changes and still maintain optimum for all employees involved in the work pace.

Few books on computers have had such a noticeable impact on software development management, such as the HUMAN FACTOR. The unique insight of this book, which for many years has maintained its position in the bestseller list: the most complex problems of software development are not technological, but social in nature. These human problems are not easy to solve, however, by solving them, you will increase the chances of success to the upper limit. In the third edition, six new chapters appeared and numerous changes were made to the main text, so now the book better matches modern development environments and modern problems. In particular, leadership pathologies that were previously not considered pathologies, the evolving culture of assembly, and the growing understanding that some of our tools serve as anchors rather than engines are discussed. Everyone who needs to manage a software development project or an entire organization of this kind will find many valuable tips on the pages of this book.

Business from scratch. The Lean Startup method for quickly testing ideas and choosing a business model

We are used to thinking that processes and management are something boring and dull, and startups are dynamic and fun, where there is no place for any rules. However, just the opposite is true: the creation of a startup should be subject to a clear methodology that has strictly defined steps. The main idea of the “economical start-up” method developed by Eric Rees is to quickly test new product ideas on real consumers and constantly adjust the business model in order to start large-scale investments only when the idea is confirmed by facts. Whoever has already read this book speaks of it like this: if you are an entrepreneur, urgently drop everything, sit down and read! And do not be confused by the words “business from scratch” in the title. Entrepreneurs are in spirit in different companies, and any business, both small and large, needs to be able to constantly analyze the business model and make timely adjustments to it.

Modern management skills are hopelessly outdated. The traditional recipes offered by books on organizational development are part of the problem, not its solution. The author of this book, based on many years of in-depth research, tells what the organizations of the future, built on completely different principles, will be integral, self-governing and evolutionary. It shows how such companies are developing - both from scratch and evolving from existing organizations. This book is for business owners, executives, coaches, consultants, students and anyone interested in management and organizational development.

Drive: What actually motivates us

Many managers are sure that the best way to motivate an employee to high results is a monetary reward, bonuses for the result or other “gingerbread”. In the end, people work for money, and the practice of “do A and I will give you B” has become almost a classic of management. It turns out that not everything is so simple. In his provocative bestseller, Daniel Pink convincingly argues that in the information age, a motivation system based only on rewards for achieving results has become not only useless, but in some cases directly harms both employees and the company. But how then to motivate staff to achieve goals and defeat competitors? It is necessary to focus on the natural desire of each person for excellence, skill and independence and to hire only those people who have a strong internal motivation. This is not as difficult as it may seem, but in the book you will find simple and understandable tools for building a new motivation system. The book will be interesting to heads of organizations of any level, as well as HR specialists.

Five Defects of the Team

This business novel is dedicated to how to competently build a corporate environment. A new leader comes to a technology company that is on the verge of decline, and begins to establish the work of a team of managers, or rather, to create it anew. Following the heroes, the reader will learn about five vices that can be destroyed by any team, as well as how to neutralize them and turn their previously uncoordinated team into a squad of winners. If the corporate environment is a weak point of your company, everyone should read this book: from the head to the ordinary employee.

Goal. The process of continuous improvement

"Purpose" is a scientific and educational book. Now these two concepts are used so often that their original meaning was lost in the fog of excessive servility and mystery. Like most serious scientists, I think that science has nothing to do with either the secrets of nature or the immutable truths. This is simply a method by which we operate with a certain minimal set of assumptions that can, through direct logical constructions, substantiate the existence of many natural phenomena. The physical law of conservation of energy is by no means true. This is just an assumption, effectively explaining a huge number of natural phenomena. It is impossible to prove the universal applicability of this assumption, no matter how many concrete examples of its validity you give. But this assumption can be refuted by a single fact that it would not be able to explain. But even such a refutation does not deprive the assumption of justice. It testifies to the need for another, more general assumption. This is how the law of conservation of energy was replaced by the more general Einstein postulate of conservation of energy and mass. Einstein's law is not true to the same extent as its predecessor.

Continuous software deployment. Automation of the processes of assembling, testing and implementing new versions of programs

Testing software delivered to users is often a painful, risky, and time-consuming process. Here is a book that presents a completely new development strategy - a set of principles and practical methods that provide a quick incremental supply of high-quality software. By automating the assembly, installation and testing processes and improving the interaction of developers, testers and administrators, the project team is able to deliver changes and new tools within a matter of hours or even minutes, regardless of the size of the project and the complexity of its code base.